Pope Benedict XVI and the Franciscans

Pope Benedict XVI and the Franciscans 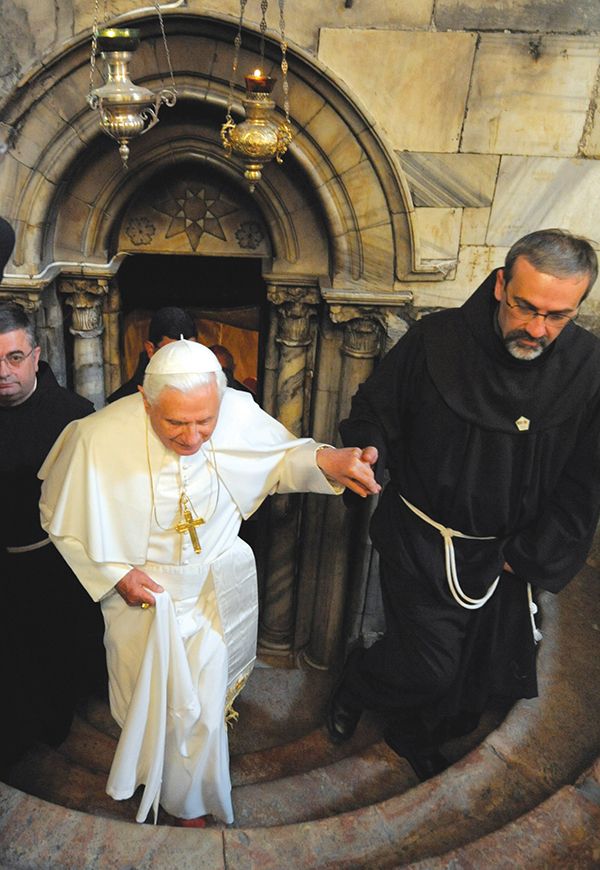 Pope Benedict with friars in the Holy Land in 2009.

With simplicity and in an atmosphere of prayer the funeral rites of the late Pope Emeritus Benedict XVI are taking place. It will take the passing of time, before the full significance of Benedict XVI’s life and work are seen with clarity. In a life span of almost a century, Joseph Ratzinger studied many of the great religious, philosophical, and political questions which have shaped our world today.

For Franciscans, it is interesting to note that Pope Benedict’s great theological journey began with a deep reflection of the Franciscan theologian, St Bonaventure. Pope Benedict was drawn to St. Bonaventure’s theology of history. He noted that, at times of great change and crisis, thinkers become interested in the question of time and the meaning of history. St. Bonaventure lived through a time of great change, and so did Joseph Ratzinger.

As a young man in this thirties, Fr. Joseph Ratzinger was already a Peritus (theological adviser) at the Second Vatican Council, helping to draft the very documents which would shape the pastoral priorities and outlook of the Church for generations.

Like St. Bonaventure, and like Pope Benedict, we are living now in a time of great change; not merely an “age of change” but a change of age, according to Pope Francis. Times of crisis and upheaval produce anxiety, fear, panic even. People look for simple answers to complicated questions; voices are raised and dialogue becomes mere debate. At such times, the wisdom of the Christian tradition, the scriptures and the writings of the saints help us find our bearings again.

Pope Benedict remarked once that people are mistaken if they see the history of the Church as one of gradual decline. Drawing on St. Bonaventure, Pope Benedict insisted: Opera Christi non deficiunt, sed proficiunt. That is, Christ’s works do not go backward, but forward! The Gospel finds new ways of expression in each passing age, expressions fitting for their time. Behind the great figure of St. Bonaventure was the Poverello, the poor little man of Assisi; St. Francis. Joseph Ratzinger knew and loved this saint too.

When St. Francis heard Christ’s call to ‘rebuild my Church’ in the early 13th century it was a Church deeply in need of renewal. As Pope Benedict wrote: “At that time the Church had a superficial faith which did not shape or transform life, a scarcely zealous clergy, and a chilling of love”. No doubt many at that time predicted the worst and quietly gave up hope for the Church. The Holy Spirit had other plans!

Pope Benedict concludes his words on St. Francis: “Francis was a great Saint and a joyful man. His simplicity, his humility, his faith, his love for Christ, his goodness towards every man and every woman, brought him gladness in every circumstance. Indeed, there subsists an intimate and indissoluble relationship between holiness and joy. A French writer once wrote that there is only one sorrow in the world: not to be saints, that is, not to be near to God. Looking at the testimony of St Francis, we understand that this is the secret of true happiness: to become saints, close to God!”

The late Pope Benedict has given Franciscans much encouragement to return to our roots and discover in our saints, Francis, Bonaventure, Clare, Anthony and many others, guides and companions for these changing time in which we live. May the Lord grant to his servant, Pope Benedict, the light and joy of the blessed in heaven. May he rest in peace.